Is The iPad The Best Investment For Mobile POS? 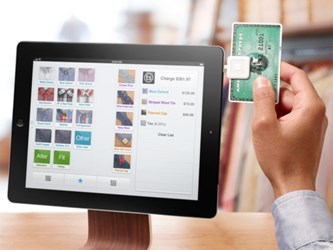 Retailers continue to increase their POS options in efforts to improve the customer shopping experience. The fastest growing trend in retail is mobile POS, enabling store associates to use a mobile device, like an iPad, to scan a customer’s items to be purchased, and accept credit and debit payments through a swipe card reader. According to research firm IHL, 28 percent of retailers plan to adopt mobile POS by the end of 2013, and the market for software to operate these peripherals will exceed $2 billion by year’s end.

When Apple began using mobile devices at POS in its own stores, other retailers took notice. Realizing that these consumer-friendly devices — iPod Touch, iPhone, and iPad — are likely very familiar to store associates, retailers saw an investment in mobile POS that was much more affordable than traditional mobile POS computers, and came with much less extensive training. However, using Apple devices for a mobile POS solution does present problems, as Matt Pillar noted. First, these products are designed, manufactured, and sold for use by consumers. The iPad was never intended to be used in a retail setting running POS and merchandise management software while having to endure the burden of constant use during the long hours of a retail day.

The iPad was designed for sedentary folks, not for the constantly moving retail associate. Sales associates are always on the move — retrieving items from stockrooms, setting up merchandise displays, shelving merchandise, etc. — and they need to adjust access points on the in-store network accordingly. If an associate, armed with an iPad, is moving throughout a store with a customer, scanning items for checkout along the way, they will need to change network access points if a big distance in the store is covered. The iPad cannot switch access points automatically, unlike mobile computers designed for retail, which effortlessly transfer network access points. Not being able to adjust access points can result in lost data, which ultimately hinders both the customer experience and the associate’s productivity.

Durability is also a factor retailers must consider. The iPad, while more rugged than it appears on the surface, is still a fragile piece of electronics. If a store associate were to drop one, it most likely would need repaired or replaced, bumping the cost of investment.

Additionally, Apple products receive updates automatically, aiming to keep software current in an always-evolving, ultra-competitive smartphone market. Unannounced changes in software and features can present problems for retailers as some dramatic changes in apps and software can be difficult to learn and manage.

With these types of challenges, it is likely that iPads in retail will mostly be adopted by smaller stores and mom-and-pop shops.

Enterprise-Class Mobile Computers Better Suit Big Retailers
Mobile POS has evolved on pace with retailer needs. Many companies, like Motorola, design  mobile computers specifically for retail. Motorola’s ET1, for instance, operates on the Android system and is designed to withstand multiple drops from sales associate with less than ballerina-like grace. The “cool factor” isn’t lost either as these computers are designed to have a similar aesthetic and feel as Apple’s tablet. Additionally, the ET1 can be customized with a company’s logo so customers aren’t confused about who is a store associate or why it seems a store associate is just browsing the web on a tablet, not working.

Accessories can’t be forgotten either. The traditional mobile retail computer often comes with scanners that read both images and bar codes, eliminating the need of a third party’s attachment. These computers also feature power options that allow batteries to be swapped without losing power to the device, and never leaving a customer alone on the sales floor.

While the iPod Touch, iPhone, and iPad have a lower initial cost and are easy to use directly out of the box, there are downfalls to their use as a mobile POS solution. Durability, security, untimely updates, and the potential for lost data can be big deterrents for retailers when considering Apple’s consumer products for business transactions. While the initial investment of traditional retail-class mobile computers for POS might be a bit more, the total cost of ownership over three years is still significantly less than its Apple counterpart in the same time frame. For retailers looking to use mobile POS now and long into the future, the pros of an investment into a traditional, enterprise-class mobile computer, far outweigh the benefits of the tablet designed for consumer use.