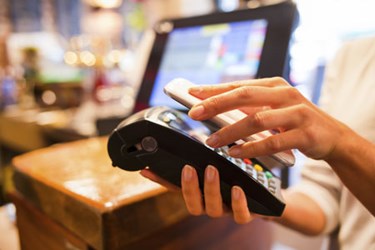 The wait may finally be over for the retail industry's response to Apple Pay. Known as CurrentC, the mobile payment app is reported to be tested this August in a limited trial run, according to Bloomberg. Employees of the retailers have reportedly tested the app, and CurrentC is now moving into its next stage. CurrentC has been nearly three years in the making, and was created by Merchant Customer Exchange (MCX), a group founded by some of the nation's biggest retailers, including Wal-Mart, Best Buy, and CVS. The consortium created CurrentC as a way to fight back against credit card fees for transactions, and will reportedly finally launch next month.

With CurrentC, customers can pay for their purchases with their smartphones at participating retailers. Bloomberg received email confirmation about the launch from an anonymous source from Lowe's. The retailer is part of the consortium, yet isn't participating in the initial rollout. Scott Rankin, a former executive at Staples Inc shared more with Bloomberg, confirming public tests.

“We expect there to be more than one successful player in mobile payments, and we expect to be one of them,” says Rankin.

MCX says its members process $1 trillion dollars in purchases annually, and have 110,000 locations. A press release issued in September 2014 says that users of CurrentC will be able to pay through a “variety of financial accounts, including personal checking accounts, merchant gift cards, and select merchant-branded credit and debit cards.”

Each CurrentC user has a personal four-digit code to access their account, and instead of storing identifiable information locally on the users' device, CurrentC stores all of the payment information in the cloud, meaning if a device is stolen or lost, thieves can't access it on the phone. Every transaction also features a unique generated secure paycode in the form of a QR code that a cashier or customer scans at the time of purchase.

CurrentC is currently available invite-only in the Android and Apple app stores. The official website for the app includes the following description: “CurrentC mobile wallet is a free downloadable app that lets customers securely save, earn participating merchant loyalty rewards and pay across our growing network of merchants.”

The mobile payment option has had its share of critics, including experts who say that consumers may be wary of a potential security breach, especially in the wake of several high profile incidents in the retail industry. While the app offers several payment options, Bloomberg reports MCX has yet to sign up with major credit card providers for bank-issued cards, which could be a stumbling block towards adoption.

CurrentC is, for now, only slated to be used in the United States, however, as Apple Pay hits the UK, the future of CurrentC internationally may be announced after the roll-out. CurrentC won't be alone in the fight against Apple Pay either, as Samsung Pay and Android Pay are expected to be not far behind. Samsung Pay testing is currently underway in Korea, and it is rumored that Samsung will include the feature in its new upcoming Galaxy Note 5 and smartwatch, while Google announced the “Pay with a Photo” feature on July 29.

We’re rebranding! In time for the Sept/Oct issue, Integrated Solutions For Retailers will become Innovative Retail Technologies. Renew your subscription or subscribe today.