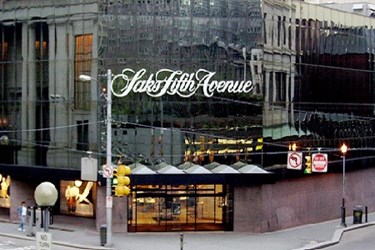 Saks Fifth Avenue looks to join the ranks of other luxury retailers, such as Nordstrom, with plans to cross over Canadian border in what could be a key time for luxury retail in Canada. According to the Toronto Star, the Toronto Eaton Centre will acquire the Hudson’s Bay (HBC) store and properties for $630 million, and in return, HBC will open a 150,000 square-foot Saks Fifth Avenue flagship in the fall of 2015. The flagship will be located in the Hudson’s Bay store in the new south end of the Eaton Centre. HBC, which only recently completed its $2.9 billion acquisition of Saks Fifth Avenue in November, also has plans to open another Saks store in Toronto’s Sherway Gardens in spring 2016.

The announcement comes just a few weeks after Nordstrom announced its Canadian expansion would also include a location in the coveted Sears location at the north end of Eaton Centre. Nordstrom will be moving into some of that space vacated by Sears in the fall of 2016. According to John Sullivan, CEO of Cadillac Fairview and owner of Eaton Centre, adding Saks to the Nordstrom, Hudson’s Bay, Kleinfeld, and Top Shop mix in Eaton Centre “will allow us to go after the higher end luxury shopper in a much more targeted way. I think we’ll be able to draw from perhaps customers and areas that in the past, we haven’t been.”

As high-end retailers, such as Nordstrom, White House Black Market, and now Saks enter the Canadian market, some are betting — like HBC’s majority owner Richard Baker — that Canada could be a burgeoning market for luxury retail. It’s unclear whether or not this will prove to be true, considering The Globe and Mail cites CIBC retail analyst Perry Caicco saying, “Canadians have been notoriously resistant to luxury department-store environments and merchandise, which is exactly why there are so few in the country today.”

However, some analysts expect Canada’s $2.15 billion luxury industry to be bolstered as U.S. companies begin expanding across the border. Not to mention there are signs that affluent households are on the rise in Canada. Households earning more than 200,000 rose 4 times as fast as average incomes and this demographic has seen nearly 15 percent growth in the past year alone, Environics Analytics says. Baker seems to believe that, regardless of the wealthiest Canadians’ tendencies to fly into the U.S. to shop for luxury, the emergence of more luxury retailers in Canada will quell the need to cross borders for goods.

Check out how Saks is fighting shrink with IP cameras

For Saks, which has seen sales and profits lagging behind those of other upscale competitors, this could be an important move to draw in new customers and revamp the brand’s image. Baker expects to spend upwards of 100 million on a “facelift” for Saks’ Toronto Flagship, he told The Globe and Mail, and he is also looking into opening locations throughout Calgary, and in suburban Toronto, Montreal, and Vancouver. The end goal would be seven to eight Canadian Saks stores. Saks e-commerce business will follow as early as one year following Saks’ entrance into the market. The company also hopes to open up to 25 of the chain’s Off Fifth discount outlets, which recently completed its own e-commerce site launch.