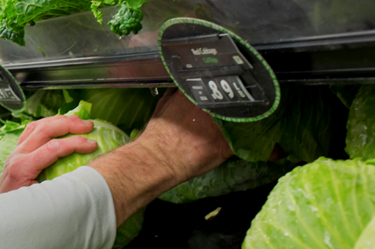 In 2016, Ahold and Delhaize Group combined forces to become a world-leading food retailer, with 6,700 stores worldwide, employing 370,000 people and serving 50 million customers a week. The company has significantly grown and is one of the largest food retail groups, a leader in supermarkets and e-commerce, and a company at the forefront of sustainable retailing. Ahold Delhaize is dedicated to helping customers shop anytime, anywhere, and in any manner – in store and online. Committed to staying ahead of the industry when it comes to the shopper experience, IT plays a fundamental role in supporting both day-to-day operations and future expansion plans for the company.

Challenges And Demand For Edge Computing

Edge computing has a critical role to play in Ahold Delhaize’s IT innovation strategy. Edge computing describes a physical computing infrastructure that is intentionally located outside the four walls of the data center. The purpose of edge computing is to place applications, compute, and storage resources near to where they are needed, used, and where data is collected.

It was essential to Ahold Delhaize that its IT infrastructure would be able to go to the next level. It was not only crucial to improve IT services today, but to future proof and have the ability to support new edge-based applications with hyperconverged technology. With its small margins, the supermarket industry benefits greatly from a cost-efficient edge platform, especially if this approach also makes new developments such as 'real-time retail' possible. Hyperconvergence at the edge allows compute workloads to be run in a small or tiny hardware footprint, processing and reducing vast quantities of data for further upload to either a centralized data center or the cloud.

Rolf Vanden Eynde, Manager Network, Strategic Infrastructure Planning, and Innovation at Ahold Delhaize explained, “Previously, our IT environment was set up with different third parties and each vendor had a different server and appliance in the supermarket – this meant each one needed its own access, whether manually or remotely. In addition, not only did each solution differ per store, but the fact that many of our platforms were purchased at different times, meant that the economic lifespan was quite different. It became difficult to manage, not only store to store, but also within individual stores, as we had different components.”

Ahold Delhaize wanted to embark on a project that would fulfill its edge deployment needs, but with the previous challenge of IT management, it was essential that any new infrastructure would only require single vendor support. After intensive evaluation, Ahold Delhaize decided a hyperconverged solution was the best approach as it provided the infrastructure needed to support the company’s current demands while paving the way for future edge computing deployments.

Ahold Delhaize evaluated the market and ran a number of comparisons and head-to-head deep dive lab tests, before opting for the Scale Computing HC3 Edge platform on Lenovo servers. Vanden Eynde noted, “We extensively evaluated the market and wanted to take the time to ensure any new IT environment could effectively support our applications and future demands.

Vanden Eynde explained, “Scale Computing HC3 Edge delivered the stability, support and simplicity we needed to modernize our stores with IoT for optimizing freezing, heating and the customer experience. Their solution also outclassed the competition on total cost of ownership and simplicity.”

As part of the upgrade, Ahold Delhaize wanted to implement a hyperconverged solution that could drastically reduce its management, support, and maintenance costs - so it could focus budgets on enhancing customer experience while ensuring the IT environment would continue to support growing applications.

Since deploying the HC3 Edge platform on Lenovo servers, Ahold Delhaize also has reduced management time by 75 percent and improved recovery time by 99.9 percent. Scale Computing HC3 Edge provides a comprehensive system that automates the overall IT management, saving Ahold Delhaize time, money, and resources. Combined with Lenovo, Scale Computing HC3 provides high performance and pay-as-you-grow flexibility, ensuring that Ahold Delhaize can eliminate the need to over-provision storage with peace of mind that its IT infrastructure can meet demands both now and in the future.

Physical security also was a consideration for Ahold Delhaize, Vanden Eynde added, “In the test phase we looked at many aspects: performance, availability, security - you name it. But there was another aspect that we looked at closely - physical security. After all, the servers are in a supermarket. Of course, we close the room in which the equipment is set up, but we also have to consider the possibility that unauthorized people could break in and might be able to access the equipment. So we looked for a rack that was designed in such a way that it is not only easy to lock, but also offers no possibility to connect a cable to a USB port from the outside. Lenovo has presented us with a cabinet that meets these requirements and it’s proven successful through our physical penetration tests."

It was essential to Ahold Delhaize that its IT infrastructure would be able to go to the next level, not only improving IT services today, but to future proof and have the ability to support new edge-based applications, which the company plans to implement in the near future.

Vanden Eynde noted, “Not only did we want to achieve core IT benefits, but collaboration and partnership were essential for us. Scale Computing and Lenovo offered a joint solution that was a perfect fit, but in addition, the process was seamless.”

Vanden Eynde continued, “We thoroughly tested the combination of Scale Computing’s HC3 platform and Lenovo servers. This combination is optimized for the use of virtualized applications and the solution offered many of the facilities we needed, however, there were still some future possibilities that we wanted to look at. Scale Computing made it possible for us to consult directly with their product developers. They have been able to fulfill many of our technical requirements and also have added some of them to their standard platform. It’s been a pleasure working with them and we feel like a valued customer. Scale Computing doesn’t take a one size fits all approach.”