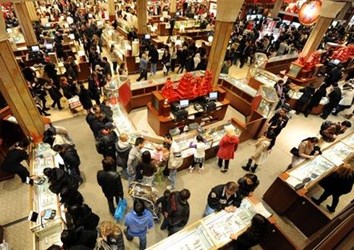 With a push from Amazon’s e-commerce muscle, the traditional brick-and-mortar retail experience and Black Friday extravaganza is increasingly being replaced with online retail. In fact, many analysts predict that Black Friday is slowly dying. According to the Chicago Tribune, just 35 percent of consumers who plan to visit the stores during Thanksgiving week said they would do so on Black Friday, down from 51 percent in 2016 and 59 percent in 2015.

Steven Barr, consumer markets leader  PwC asserts, “Black Friday has lost its significance. Retailers have conditioned the consumer to believe everything’s on sale every day, which means the deals on Black Friday are not significantly different from any other time.”

In fact, in 2016, three million fewer shoppers hit the stores on Thanksgiving weekend than in 2015, and numbers are expected to drop again this year, Business Insider reported. "The whole idea of Black Friday and Cyber Monday ... is becoming less relevant as the consumer is generally accustomed to great deals, or at least getting a deal," Josh Elman, a consumer and retail analyst with Nasdaq Advisory Services, told Business Insider.

Forbes talks about this trend as the “graying Black Friday,” as “Black Friday is morphing into Black November.” Meanwhile, sales on Cyber Monday have steadily climbed over the past decade, reaching a record-breaking $3.45 billion in 2016.

In fact, “The notion of ‘Black Friday’ has become a week-long event” Sam Sisakhti, Entrepreneur and founder / CEO of UsTrendy stated in an email.  “This has rapidly evolved over the past few years as retailers look to squeeze additional revenue out of their stores with competitive discounts and other incentives. This year, personalized sales based on shoppers history and likes will be a game changer."

Major retailers specifically in the clothing and fashion sectors are beginning their Black Friday sales incentives early to get a jump on the holiday shopping season.  UsTrendy, for example, will run a “Countdown Sale” to provide additional discounts and sales incentives during the days leading up to Friday.  Sisakhti indicates this is starting to become the “norm” especially for clothing and fashion retailers.

“Our operating costs continue to rise throughout the year so we try to create additional revenue opportunities by starting our holiday shopping season up to 5 days earlier” states Sisakhti.  “Macy’s and Sears really started this trend and competitors were forced to follow their lead.”

The recent PwC analysis reveals that the extreme focus on prices and promotions has driven gross margins downward during Q4 over the last five years, forcing retailers to adopt a more strategic approach to sales. Macy’s, for example, is revamping its rewards program to focus on the 10% of its customers who generate 50% of its revenue.

While Black Friday is losing its status as a decisive moment for consumers, for retailers, it still remains a milestone in a long-distance race.

As customer trends change, we are left with the glaring question: Will our traditional notion of Black Friday camp outs and overcrowded malls become a thing of the past?

Only time will tell if Alibaba’s influence will usher in a new era of offline retail, but without additional private market backing traditional brick-and-mortar may become obsolete in the years to come.