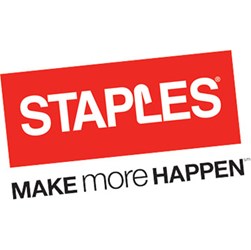 Web sales grew 8% in the second quarter of 2014. Staples does not break out web sales figures.

But during a conference call with analysts, CEO Ron Sargent provided insight into Staples’ evolving Omni channel strategy. “We’re also building an Omni channel offering with the recent launch of buy online, pick up in-store,” he said. “This provides customers with the convenience of ordering from Staples.com and picking up available products within two hours at the nearby store of choice, and early results are running ahead of expectations.”

The new order online for in-store pick up program was launched in July and comes at a time when same-store sales decreased 5%. The retailer announced it would close 40 retail stores in North America, bringing the total to 140 store closures for the year.

Another Omni channel effort, the in-store Staples.com kiosks, saw double-digit sales growth during the quarter. The kiosk program gives consumers the opportunity to order from Staples.com within physical stores. Demos Parneros, president of Staples North American stores and online explained: “Online customers are actually coming into the store and making purchases online and love the experience.”

Staples also has plans to adapt more competitive pricing.  According to Sargent, Staples’ prices are on average 10 to 15 percent higher than its most aggressive price competitor: Amazon. “We have begun to sharpen pricing over the last six months,” he said. “We’re going to continue to sharpen pricing in key categories to ensure that we’re in a reasonable range of online competition.”

Sargent argues, however, that Staples provides a wide range of value beyond price, including  free delivery, next-day delivery, no minimum order size and 5 percent back in awards for customers who spend over $1,000 a year. Staples has had success with a price-matching campaign for back-to-school shopping, and the retailer looks to expand that to match prices of items its competitors stock both in our stores and online.

For the first six months of the fiscal year, Staples reported:

Sargent stated:” As you know, we are working hard to position Staples for the future and to build a stronger foundation for long-term growth. Our reinvention strategy is focused on investing in our best growth opportunities, aggressively reducing costs and changing the way we work to stabilize our underperforming businesses. With the early investments that we’ve made to drive growth on our delivery businesses and to expand our assortment beyond office supplies are paying off.”