Staples Takes Battle With Amazon To The Stores 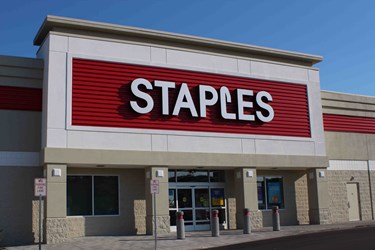 The office supply retailer takes steps to extend its Amazon price matching program on and offline.

In a move that further distances itself from Amazon, Staples announced that it will match Amazon’s prices in stores beginning November 3, in an effort to boost holiday sales. Staples is not only one of the top office supply companies in the U.S., but it ranks second only to Amazon in online sales in North America.

Earlier this year the company gave Amazon the boot from its stores by removing Amazon’s delivery lockers from stores. At the time, Staples gave no indication that it was for competitive reasons, saying only, “We evaluate many new products and services in our stores and this was another example,” in a press release. Now, it appears the removal of the lockers may be part of an overall strategy to better compete online.

“We’re the second largest e-commerce player after Amazon, and that’s part of the reason why we’re matching them,” said Alison Corcoran, senior vice president of North American stores and online marketing at Staples. “As far as we’re concerned, they are the leader. We’re battling with them to try to get closer.” The company also has stated that it will match prices of retailers who operate both brick-and-mortar and e-commerce sites. However, it specifically stated that it will also match the prices on Amazon, who is an online-only retailer. This marks the first time the stores are matching Amazon pricing. In the past, Staples.com — Staples’ $10 billion e-commerce channel — has been matching Amazon’s pricing, but stores could not.

“Staples is committed to offering great products at the best prices," said Alison Corcoran, senior vice president of North American stores and online marketing, Staples. "Whether shopping in-store or online, Staples customers will be able to shop confidently, during the holiday season and beyond, knowing that we are providing them with all the right products and must-have gifts at the lowest prices.” The plan is to make the price match process as simple as possible. If Staples customers find a lower price on a new, identical item, they can show the Staples Customer Service Desk associate the lower price at the time of purchase in a Staples store and Staples will automatically match the price. For a price match on Staples.com, customers can call customer service.

This move is hardly surprising. Amazon and Staples have been direct competitors for years. A search on Amazon for office supplies brings up almost 1.7 million entries, so the only real surprise is why it took Staples so long to take action. As traditional retailers like Staples compete more with online retailers, they will have to continue to enhance the customer experience in the store and online. Staples seems to be making the right moves, having recently acquired Runa, a software company based in San Mateo, Calif. that helps online retailers increase sales by personalizing the shopping experience, and Lonesource, an online seller of office supplies with an excellent online selling platform. In addition, the company recently announced the opening of its first offices dedicated to improving site engineering and e-commerce. The hope is to continue to build upon the current e-commerce and brick-and-mortar foundations to remain competitive in the new omni-channel world of retail.